If you want to take your Twitter account to the next level, review the following data thoughtfully. It will allow you to take a fresh look at this popular social media platform. And, also, it will help you to take the lessons from the best practices.

In 2019, the number of monthly active users exceeded 330 million.

And according to official data, 23 million of these “active” users are bots. It means that 7% of all Twitter accounts are bots, not real people.

The world goes mobile. Modern users prefer to surf the web using their smartphones, not laptops. And it’s not hard to guess that this Twitter trend will continue.

Journalists create the most meaningful tweets. They are not afraid to discuss “hot” topics and speak up their minds.

Well, journalists do not have as many followers as pop singers and top athletes. Nevertheless, they greatly influence the Twitter community, when it comes to politics, healthcare, and education.

80% of all Twitter users are Millennials and Generation Z

Most Twitter users are 20-35 years old. Baby Boomers, Gen X, as well as modern teenagers, don’t use Twitter as often as Gen Y and Gen Z.

People use Twitter more actively during these few hours. Tweets created at this time of the day get the most likes and retweets.

Surprisingly, two from five Twitter users don’t create tweets. They follow numerous accounts and read tweets posted by others. But they don’t produce any digital content or ask for help digital marketing agency. Some of these users don’t want to share their ideas online because they have a fear of being judged.

They don’t follow brands. However, experts state that the situation will change in the next few years. Companies continuously improve their content marketing strategies. And it’s expected that Twitter users will become more loyal to brand accounts.

Photos, memes, animated GIFs, infographics, and other visuals help to boost reach and engagement and achieve higher results. So if you want to make your account popular on Twitter, never forget to add an image to every tweet. It will take your marketing efforts to the next level.

So if you run a Twitter account for your business, you should do your best to gain more followers. It will help you to increase customer loyalty and boost sales.

Twitter users are more loyal to companies that reply to their tweets.

According to the recent study, 77% of users feel more positive about brands that interact with their target audience. So if you run a business account on Twitter, you should never ignore comments and tweets written by your customers.

It’s hard to believe, but the company had been remained unprofitable for almost ten years. In 2017, Twitter decided to cut costs on sales as well as research and development to gain first profit. As a result, it earned 91 million dollars.

Company has more than 35 offices all over the world: from Atlanta to Amsterdam, from Bogota to Delhi. Twitter strives to increase workplace diversity to drive innovations.

Now let’s talk about accounts, tweets, and hashtags that are the most popular on Twitter.

Her closest “competitors” are Barak Obama and Justin Bieber. They have more than 106 million and 105 million followers, respectively.

According to the recent Twitter stats, the most mentioned women are Lady Gaga, Nicki Minaj, and Beyonce. As you have noticed, most women from the Top-10 list are American pop singers.

The interesting fact is that Demi Lovato is one of the most mentioned women on Twitter, despite that she hasn’t created her official account yet. Yep, Demi’s fans discuss her a lot in their tweets. 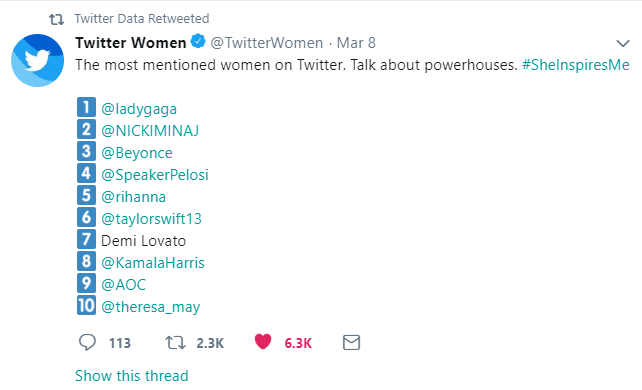 The most mentioned sportswomen are Serena Williams, American tennis player, Becky Lynch, Irish wrestler, and Naomi Osaka, Japanese tennis player. As you can see from the Top-10 list, professional wrestlers are the most discussed female athletes on Twitter. 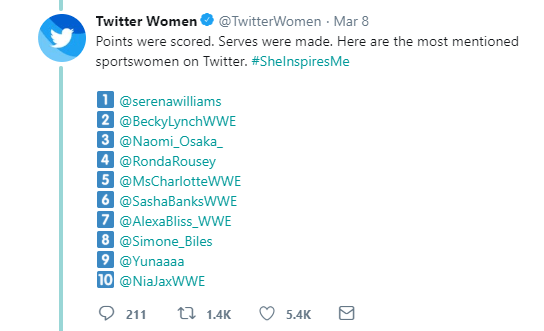 He promised to randomly select one hundred users and gift them a share of 100 million Japanese yen. People love freebies, so it’s not a big surprise that almost five million users retweeted the post to participate in such a generous giveaway.

The most used hashtag in 24 hours

Twitter users create thousands of new hashtags every day. And only some of these hashtags go viral online.

The most used hashtag in 24 hours is #AlDubEBTamangPanahon. It was used by more than 40 million people on the 24th-25th of October, 2015. The hashtag was created for the TV event featuring famous Philippines couple Alden Richards and Maine Mendoza. 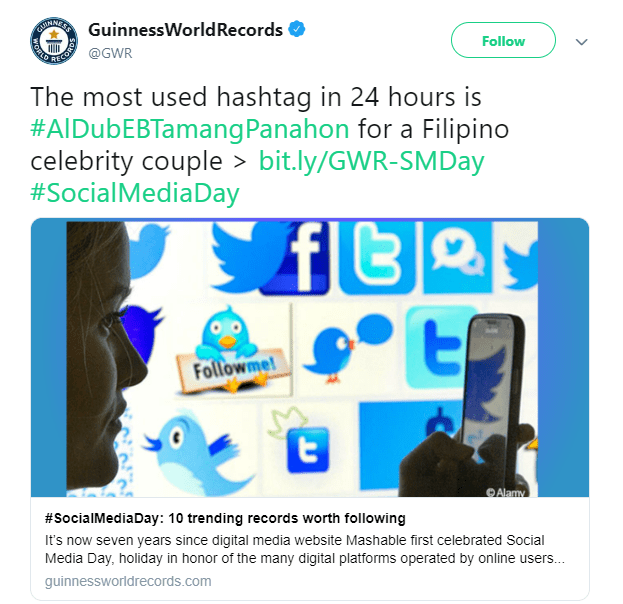 “The most used hashtag in 24 hours”

This is an absolute record. There are no other celebrities on Twitter who won so many followers within such a short period.

Currently, he has over 18 million followers. It’s not that much compared to Bruno Mars, Niall Horan, Amitabh Bachchan, who have in two times more followers.

When Twitter expanded its character limit from 140 to 280, people started to use internet slang words and acronyms less often.

For instance, the usage of abbreviations “gr8” and “b4” dropped by 36% and 13% respectively. Also, people started to use the words “thank you” and “welcome” more often.

“Use of common abbreviations following 280 characters increase on Twitter”

If you want to get more followers in 2019, craft your content strategy with Twitter stats in mind. Monitor trending topics and hashtags, analyze popular tweets, and always put your target audience first. And then nothing will hold you back from achieving your Twitter goals.

Erica Sunarjo is a professional writer, translator, and editor with a Master’s degree in Marketing and Social Media. She writes thought-provoking articles for publications in a variety of media and is an active member of the translator community.